visuals_clc
July 2014 edited July 2014 in General Support
Hello, I've used OpenLP for several years on OSX with no problems.  Unfortunately I need to use it on Windows now, and have a problem Ive not been able to solve.  When I install the latest version (v2.0.4) on my Windows7 laptop, I get the following popup: 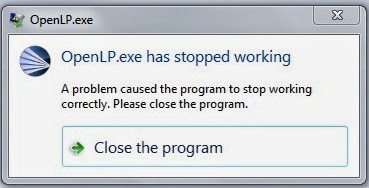 So, I work in IT and although I don't specialise in Windoze, I do similar stuff for a living.  Here's what I did:
Background is my laptop is Windows 7 Home Premium with all patches and security fixes applied via Windows Update.
I uninstalled and reinstalled, rebooted and tried again--no difference.  I even tried the portable win install and same error. Latest developer version 2.1-- no go either.
I googled it and found an article that mentioned a similar issue with an old v1 install where the fix was to rename/remove the OpenLP folder that was left behind in the Data folder.  Did that, made no difference.
Googled for an old version of OpenLP.  Found OpenLP-1.9.5.exe and installed it fine. It ran and seemed to work.  Hurray!  Try upgrading v1 to v2 but that still gives me same error as before, identical to the popup I've included here, above.
So I went to my Mac laptop running OpenLP v2 and exported my songs.  At the end of the export it says to use the OpenSong importer to import them.  It won't give me any options of which format they are exported to, so I can't export them in any other format.
Then when I go to my Windows laptop with OpenLP v1 I can select the songs for import if I use OpenSong as the format, and it says they've been successfully imported.  But then checking the songs I have all of them showing as "unknown" with no lyrics or information at all showing in them.
So my new windows laptop is stuck with old version of OpenLP that won't run if I upgrade it.  Plus I can't get the songs imported to it anyway as the songs created on my v2 Mac won't import correctly into the old Windoze v1 OpenLP.
Thanks in advance for any help anyone can give.
cheers,
KC
Share on FacebookShare on Twitter Share on Google+